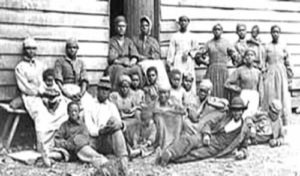 This photograph was taken in 1862, Cumberland, Virginia just prior to the signing of the Emancipation Proclamation (1863) which abolished slavery.

The photo makes you wonder “Who are these people?” “How did they live?” “What happened after they were freed?” “Did they go to the North or to the West?” “Or did they stay in the South?” Freedom to people who had been enslaved all their lives, was a foreign notion that left more questions then answers.

Contrabands in Cumberland, Virginia, (1862). What do you see when looking at these contraband slaves posed in front of “Foller’s house?”

The house is probably the residence of their former owner. The photograph was taken in 1862, during the Peninsula Campaign by photographer James F. Gibson, who may have had the same fascination with enslaved blacks as the rest of the people in the North. ”

The so-called “contrabands” (enslaved blacks within Union lines prior to the Emancipation Proclamation in 1863) were more than a curiosity however. They also posed a real problem to whites in general and the Union army in particular as to what to do with them.

Up to this point in the war, the Union had not fully committed its forces to the idea of the Civil War as a war to end slavery, but rather to a limited war to preserve the Union.

Slaves, on the other hand, forced the issue by seeking out the Union forces in droves, looking for protection, and offering their services to the army that would one day free them permanently.

Your ticket for the: Contrabands in Cumberland, Virginia