Lest We Forget Slavery Museum > Blog > Featured > A Slave Ship

During the late 1800’s many abandoned ships that had lost their spars and rigging often rested along the wharfs of lower Manhattan. This rare photo of a three-mast merchant vessel was shot Nov. 4, 1860 as it tossed and bucked at her mooring lines on the harbor’s restless water.

Witnesses in near proximity reportedly said they could catch a whiff of the distinctive stench that every well-traveled mariner in that day and age knew: the reek of closely-packed bodies, human misery, captivity and death.

She was the slave ship Erie and she had recently come to New York as a captive herself. A U.S. naval vessel, patrolling for ships engaged in the illicit trade, had seized her off the mouth of the Congo River. Flinging open the hatches to the cargo hold, the officers saw a dim tangle of bodies moving in the darkness, packed so tightly that they seemed almost a single tormented soul.

Nearly 900 Africans, half of them children had been stripped naked and forced below decks at the height of equatorial summer, aboard a vessel barely more than 100 feet long. Just a few days into their weeks-long voyage, a witness later recalled, “their sufferings were really agonizing, and the stench arising from their unchecked filthiness was absolutely startling.” Even after their rescue, dozens died in a matter of days.

It might seem odd today that the American government was freeing slaves across the Atlantic while zealously protecting the “property rights” of slaveholders closer to home.

Not long after Congress abolished slave importation in 1808, however, U.S. and British naval vessels had begun policing the African coasts and the waters of the Caribbean, occasionally even bringing the captains and crews back to stand trial under federal law. 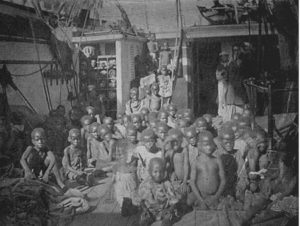 The freed captives, no matter where in Africa they had come from, were set ashore in Liberia, often to be set to work there in conditions little better than slavery. This was one of many such hypocrisies born of political compromise that most Americans in 1860 took for granted.

Most European naval powers agreed to end the slave trade early in the 19th century, but illegal commerce continued. Photography did not exist during the heyday of the slave trade but was available when a British Navy officer on a ship intercepting slavers in 1869 took this picture.

Shipboard conditions look much like the graphic depictions in earlier accounts. As in the past, children and those not thought dangerous were allowed on deck. Others were kept in the hold.

Your ticket for the: A Slave Ship