Lest We Forget Slavery Museum > Blog > Slavery > Slavery In Philadelphia

Philadelphia’s Dark Past: A History of Slavery Comes To Light

Philadelphia is affectionately known as the “City of Brotherly Love” and “Sisterly Affection”, however slavery of Africans has a long and troubled history here.

Mt. Airy historian Phillip Seitz, 55, in his book,“Slavery in Philadelphia: A History of Resistance, Denial and Wealth”.

The book, sheds light not only on the Chew family, one of the largest slave holders in the region but on Philadelphia’s role in the demand for slave-driven labor. (Those of us living in Northeast Philly are familiar with “Chew Avenue”)

Slavery history: The Cotton King of Philadelphia. Posted on … And what if most of it had been grown and picked by slaves, and used by a single company in 1859? What if there was an … Historical Society of Pennsylvania.).

Seitz, the Curator of History at Cliveden House, a 1767 National Trust Historic Site, for 10 years until January, 2011, told us last week, “One of the nice things about being a historian is sometimes you find documents that speak for themselves, so even people from the past can finally have their voices heard.” 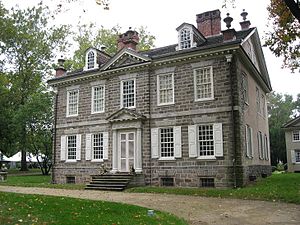 Cliveden Plantation, Philadelphia, PA. Cliveden, Home of the Chew Family, Philadelphia, PA … A bathroom with indoor plumbing and closets were all indications that the dwelling was lived in far beyond the ending of slavery in Philadelphia. Not having a flashlight, I was incapable …. Smithsonian Museum.

April 14, 2014. Protected: Thank You for Registering for “Unearthing Treasures: Tracing Your African American Ancestors at the South Carolina Historical Society!”

Seitz was doing research in the Chew Family Papers, a collection at the Historical Society of Pennsylvania, when he came across a letter written by George Ford, overseer of the Whitehall plantation, to his employer, Benjamin Chew, of Philadelphia, on Aug. 20, 1795.

In the letter Ford writes, “I am very porly at this time and wold wish you to come down as quick as posable you can for I am in danger of my life being taken by the neagros Last thursday evining I was beatin by Clubs till I was blody as a bucher with severll bad wounds so that I am hardly able to go about to see to any thing therefore I hope you will Come down and correct them to give me satisfaction for their abuse.”

“The letter was about the enslaved people on the plantation beating up the overseer, which is not what I had expected to find,” Seitz said. He discovered a whole series of letters regarding the Chew’s Whitehall plantation detailing accounts of previously unknown slave rebellions. The letters give readers an intimate look at the Chew family’s daily dealings with slaves on their plantations. “Through these letters, we could see with more intimacy than I have ever encountered, resistance on the plantation by the enslaved people,” Seitz said. “They revealed a whole series of relationships that are usually hidden because there is no documentation or because people have forgotten or even because people have tried to cover them up.”

He said that the Chew family, like many other wealthy families, made money manufacturing cotton goods from slave-picked cotton. “Philadelphia was a manufacturing powerhouse, which fed an intense domestic hunger for cotton products. The North played an essential role in supporting slavery by inhaling the products of slave labor for distribution into the national and international markets and by using slaved-raised raw materials to manufacture goods for sale in the North, South and across the Atlantic.”

Philadelphia Story: The Slaves At The President’s House

From the New York Times, “Reopening a House That’s Still Divided,” by Edward Rothsetin — PHILADELPHIA — The convulsive currents that roil the telling of American history have become so familiar that they now seem an inseparable part of the story itself. Here is a nation, conceived in liberty and dedicated to a proposition of human equality, that, for much of its first century of life, countenanced slavery, institutionally supported it and economically profited from it. The years that followed have been marked by repair, reform and reversals; recompense, recrimination and reinterpretation. Extraordinary ideals and achievements have been countered by extraordinary failings and flaws, only to be countered yet again, each turn yielding another round of debates.

In 2007 an archaeological dig began, revealing the foundation and the remains of a tunnel once used by servants and slaves. The dig, viewed by the public, ignited debate.

Washington ultimately took nine slaves to Philadelphia from Mount Vernon, where more than 200 slaves were held. And they were part of a household staff that may have numbered two dozen, including white indentured laborers and servants. Though the slaves were part of a population of nearly 4,000 others in Philadelphia, there were also more than 6,500 free blacks in the city in 1790, and Washington’s slaves were exposed to the experience of liberty.

During the years spanned by the first session of Congress the seat of the United States federal government was located at New York City’s Federal Hall. When the first session of congress was over the government moved to Philadelphia, Pennsylvania. President George Washington and his household ended up moving into a fairly plush residence owned by Robert Morris, which was in easy earshot from the Liberty Bell. A snippet selected from the article, The President’s House in Philadelphia – A Brief History of the President’s House in Philadelphia, by Edward Lawler, Jr. of the Independence Hall Association, describes how the Washington’s adjusted to their new accommodation: Small Groups Push for Recognition of Slavery in Philadelphia

A tiny nonprofit and an unincorporated group kept the pressure on the National Park Service to tell the story of how President George Washington held on to his slaves in the original US capital after Pennsylvania abolished slavery. A story… … The mansion was located in what is now Independence National Historical Park, and the former slave quarters were right next to what is now the Liberty Bell Center. Pennsylvania had passed a Gradual Abolition Act in 1780.

Your ticket for the: Slavery In Philadelphia