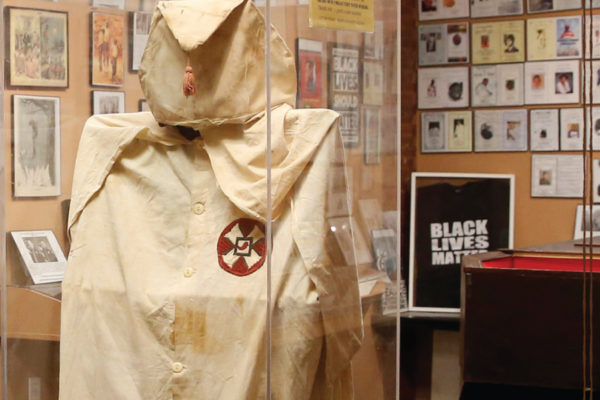 The Lest We Forget Museum of Slavery provides a unique historical perspective into the reality of slavery for Africans brought to America. It is the only museum of its kind in Philadelphia that exhibits authentic slavery artifacts which include hundreds of shackles, chains, coffles, branding irons and other forms of punishing ironware.
Authentic documents show how enslaved Africans were bought and sold as chattel. Numerous “Jim Crow” objects which negatively depicted and ridiculed African Americans, creating a lasting racist attitude, are also on display.  Incredible African works of art – sculpture, oil paintings and vintage photographs line the walls of the museum. Descriptive contextual panels are posted throughout to assist visitors in understanding the significance of this period in American history.
The Lest We Forget anthology of collected works visually and emotionally documents how different coming to America was for Africans, who were enslaved and forcibly brought to America when compared to other immigrant groups. We tell the story of the African slaves strength and sacrifice. We celebrate the contributions made by African slaves to the building of the United States of America despite their being denied the freedom to share in the “American” dream.

“I thought I knew about slavery until I visited the Lest We Forget Slavery Museum,”  – Recent Museum Visitor

Make sure to copy Registration number after successful submission.

Thank you for payment.

Your ticket for the: Museum